The Level Playing Field team are delighted to announce the winners of our Fans Awards 2011. We would like to thank everyone who nominated a candidate. We had many outstanding contributions sent to us that all deserve reward, but we had to choose just three nominees.

Kev is a Coventry City supporter who, in March 2011, was recognised by the Football League as Fan of the Year. He hasn’t missed a single game, since 1981, and even that was only because of heavy snow! Kev takes a similarly keen interest in the Coventry Ladies and Academy sides, and regularly can be found attending the opening of the Tour de France cycle race.

Kev runs a dedicated Coventry City fans website, the ‘CovSupport News Service’, and money raised through this is given to charitable causes. The site boasts over 1000 users who rely on Kev as their source of news regarding the club. Kev also serves on the Coventry Charity Cup Committee, helping to raise £10,000 every year for their nominated charities. Furthermore, he works hard to promote epilepsy and Parkinson’s disease charities and has been an invaluable supporter of charities for the armed forces; this was particularly poignant in August 2009 when separate incidents in Afghanistan saw four Coventry City fans killed.

Kev has been described as “an inspiration to other disabled supporters” and he has fully earned this award. Congratulations Kev!

This award is given in honour of Joseph Wratton, a passionate West Ham United fan who passed away in 2010. Joseph followed his club home and away and touched the hearts of many, many people along the way.

This year’s winner of the Volunteer Award is… Albert Boseley

Albert is a 92-year-old Notts County supporter who never misses a home game. Alongside this, he works as an agent for Lifeline; this is a lottery scheme for fans that aims to raise money which the club can then reinvest into such areas as the Centre of Excellence and charitable partners. Albert is passionate about his work for Lifeline, and is well-known among many Notts County fans.

Albert has been described in his nominations as “an inspiration”, “a wonderful volunteer” and “a true Notts County legend”. We couldn’t agree more. Congratulations Albert on a well-deserved award!

Special recognition must also go to Neil Appleyard, Chairman of the Hartlepool United Disabled Supporters Association, and Paul Hodgson of the Darlington Supporters Trust. Despite supporting rival clubs, Neil and Paul were pivotal in founding the Darlington Disabled Supporters Group, as well as working tirelessly for their respective clubs’ disabled supporters. For putting local pride to one side and working together magnificently, we commend both men!

Julie has worked for West Ham United as their Disability Liaison Officer for a number of years, and has been able to help a significant number of people along the way. Julie works tirelessly on both matchdays and non-matchdays to help the club’s disabled supporters in any way that she can, regularly going the extra mile to find a positive outcome. Julie continues to approach issues with a ‘can-do’ attitude, and her friendly, helpful nature is clear to all that meet her. She possesses a strong work ethic and strives to solve as many problems faced by disabled supporters as possible.

Julie has been described as “a real asset to West Ham United” and showing “extraordinary personal commitment to the club’s disabled fans”. This award is fully warranted – congratulations Julie!

Special mention must go to another of our nominees, Alun Francis, Disabled Liaison Officer of Arsenal FC. Alun’s team received the 2010 RADAR Accessibility Provider of the Year Award, and he puts in a lot of hard work to help disabled Arsenal supporters however he can. We thank Alun for his continuing commitment to the cause.

We would also like to recognise the long-service contributions of Gary Deards and Janet Ireland – two of our own trustees – who also received independent nominations. We didn’t make it clear when asking for nominations that current trustees would not be eligible for an award but we (and those that nominated them) would like to recognise the commitment to disabled supporters through their work with their respective clubs, Reading and Sheffield United, and of course by their many years of service to Level Playing Field. You are both a credit to the charity!

To all of our winners – and also to those nominees who did not win an award on this occasion – we would like to say a massive thank you for your outstanding contributions and we know that you will continue with the fantastic work that you are doing. 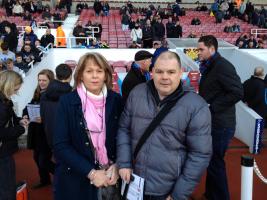