A view from the Stamford Bridge away supporters’ wheelchair area: ‘ I couldn’t see the goal’

Anthony Joy and his friend Anne Hyde knew what to expect on Sunday’s annual visit to Stamford Bridge.

Joy, who suffers from spina bifida, took up his usual position for away fans who are wheelchair users behind a row of able-bodied Arsenal supporters. He could sample the atmosphere but, as for seeing decisive goalmouth moments of the match, he was reliant either on excited supporters staying seated or the television highlights once he got home.

“People say, ‘Why do you go?’ But, if you ask me that, then you are not a football fan,” he says. “I want to be there to support my team but it’s incredibly frustrating and unacceptable.”

Hyde is also in a wheelchair. “I could not see the goal or anything going on around the goal area,” she said. “Is that right? The other fans are never going to sit down – it’s the way of football. I had two people in front of me who were over 6ft. They blocked off virtually my whole view of the pitch. It spoils the whole thing.

“We are not in any position to stand up or move around. We don’t have a choice; we are in wheelchairs.”

The view from the away fans’ disabled section at Stamford Bridge is even worse when the match begins and fans in front stand up CREDIT: ANNE HYDE

It is not a tribal point and, while regarded by campaigners as one of the worst Premier League grounds for disabled fans, the bad experiences spread far beyond Stamford Bridge. Lisa Hayden is a Chelsea fan and has been in a wheelchair for 12 years since suffering three brain haemorrhages and two strokes.

“You just don’t dream of something like that happening to you,” she says. “When you go from able-bodied to a chair, everything changes, including your perceptions.”

Hayden is seated pitchside at Stamford Bridge and, to get a clear view of the action, is at the mercy of photographers.

The view for wheelchair users in the away section at Stamford Bridge CREDIT: ANNE HYDE

“A lot are considerate but at Champions League games we have a particular issue,” she says. “It does spoil a game because sometimes I miss the goals. Every time we bring it up, we are told we will have a new ground soon. Everything seems to be on that proviso, but you are looking at something that is years away. They should be making some provision in the meantime. The clubs all set their own target on disabled access and haven’t met it.”

Hayden says that she experienced similar issues this year with photographers blocking the view of away disabled supporters at Leicester and she has stopped going to Crystal Palace and Liverpool – in spite of improvements this summer – because the past experience was so bad. At some grounds, away disabled fans have been regularly placed with home supporters. “I’ve been spat at – in this day and age you should not be seated with other clubs’ fans,” says Hayden.

Hyde was told at one former Premier League stadium that she could not even celebrate as she was seated with home fans but she also stresses that there are some “fantastic” grounds.

“You want to enjoy the match but quite often you can’t,” she says. “Clubs have started to improve but nowhere near what it should be. They have had years to get this right.” Joy is clear about what should now happen. “Someone has to take action rather than issue warnings,” he said.

“Who is really holding the clubs to account? There should be sanctions for those who have not addressed this and not just a fine. A game behind closed doors or dock them points. They have fallen short.” 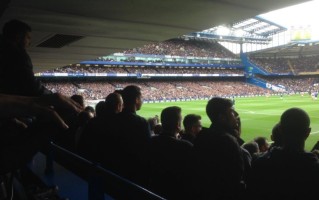