A social media campaign has helped a massive Liverpool fan with celebral palsy achieve his dream of watching his heroes play at Anfield.

Aaron Browne, 18, has been a reds fan all his life and his dream began to take shape after his uncle had posted a message on Facebook, which was picked up by the Liverpool Disabled Supporters Association (LDSA) and the Dromore LFC Supporters Club.

A visit to Merseyside was soon arranged and Aaron took his seat in the famous Kop stand for the first time to watch the Premier League clash between Liverpool and Crystal Palace in November.

Aaron, along with his mum and dad, came over from Ireland and before the game met Steve Evans from the LDSA, who greeted them and welcomed them to Anfield. Steve then had the pleasure of telling them that the club would like to go ahead and invite Aaron to visit Liverpool’s famous training ground, Melwood, and meet a current first team player in January. Needless to say Aaron was speechless and very thankful for the club’s invitation.

Everyone at Level Playing Field hopes Aaron enjoyed his first game at Anfield and will enjoy visiting Melwood this month. 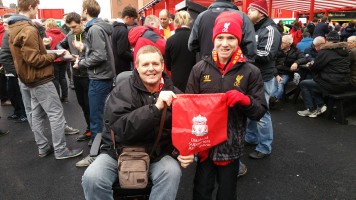