The new facility, which contains a range of sensory tools and games, will give fans with profound special needs the opportunity to enjoy matches with their families and carers at Emirates Stadium – in some cases for the first time.

This was the case for seven year old Reggie from Camden – who was able to come to his first ever Arsenal game on Monday evening with his mum Carly.

Carly said: “This is priceless. I’ve never been able to take Reggie to a match before. He’s always been supported by Arsenal through Arsenal in the Community and The Arsenal Foundation, but now he can actually experience a match with me. I used to come to Highbury with my dad and I’ve never been able to do that with my son because autism put up a real barrier for us, but now I can.”

The new sensory room is credit to the Shippey Campaign, which was created by the parents of three children with Autism.

Peter Shippey, who attended the official ‘opening’ of the room on Monday, said: “It’s fantastic that Arsenal have created a sensory room. This room will allow autistic supporters and their families to enjoy football, maybe for the first time in their lives. It’s an incredible facility and it is brilliant to see Arsenal taking care of their supports and opening a door that may have been previously shut.”

This facility adds to Arsenal’s long history of providing the right facilities and services for our disabled supporters, dating back to the early 1960’s when we first introduced a commentary service for blind and visually impaired supporters, a service which continues to this day.

As part of the Arsenal for Everyone initiative, Arsenal also provide an audio version of every home match day programme for blind and visually impaired supporters and we were the first Premier League team to install a Guide Dog Toilet facility. Other facilities and services which have been introduced include a Disabled Supporters Match Day Lounge, where disabled supporters can meet and enjoy a hot drink before games.

The club also provides Changing Places Toilet facilities which includes a hoist and changing table enabling severely disabled supporters to come to games knowing that there is a toilet that they can use in safety and comfort. 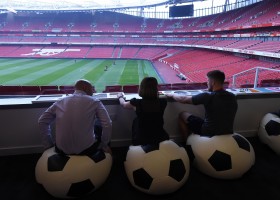