A group of unsuspecting young disabled fans had a great surprise on a recent tour of Arsenal’s Emirates Stadium where they were met by Arsenal players Petr Cech and Hector Bellerin.

Emmanuel, Max, Jacob, Annalise, Connor and Nyelle from Arsenal in the Community’s Down’s Syndrome football group were surprised by the Gunners stars as they waited for them in the home team dressing room.

With Arsenal shirts bearing the names of the young fans hung in the same place as illustrious stars such as Alexis Sanchez and Mesut Ozil are on matchdays, they were also presented with match tickets for a Champions League tie – a 3-0 Arsenal victory over Dinamo Zagreb.

From the Daily Mirror (Including great video) 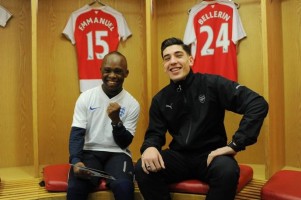