Aston Villa were one of the heroic clubs and DSAs who persevered with their support of Level Playing Field’s Weeks of Action in spite of their original dedicated match on 3rd Marchbeing snowed off.

They chose to celebrate #OurMatchday on 14th April in their fixture against Leeds. With great social media support from the Foundation as seen here and here.

With the DSA handing out LPF pens and wristbands and the club displaying an LPF Weeks of Action banner as well as some kind people sporting Level Playing Field t-shirts (as pictured), this is another example of great working together.

The highlight of the day was their annual show piece LPF cup final, at half time during their league game V Cardiff City. This year it was between Langley SEN school and Skilts SEN school with Skilts winning 1-0. They played our qualifying rounds in February, in the academy building at Villa Park. They had 12 teams entered over the two days, with the two finalist’s going forward to play in the show case final.

Thank you to everyone who was involved. 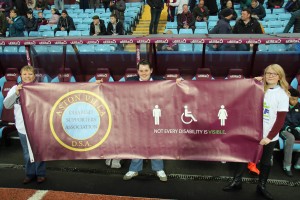