An Everton matchday steward who has autism has thanked the Club for making his career dreams come true and called on other autistic fans to visit Goodison Park.

Jordan Connerty, 22 from Liverpool, was offered a permanent stewarding role with the Toffees at the start of the 2016/17 season, after a successful placement working alongside kit man, Jimmy Martin, at USM Finch Farm. Speaking to Everton as part of National Autism Awareness Day, Jordan said: “I was diagnosed when I was three-years-old and, at that time, I was only little and I didn’t know what autism was but my parents told me that I was different from everyone else. As I’ve gotten older, it’s made me who I am.” Commenting on his stewarding role, he added: “I check in on the crowd, make sure everyone is feeling alright and overall just make sure that everyone is having a good time! Everyone treats me like family. “The Club has helped me massively – they’ve given me support, they’ve given me confidence and they’ve helped me out in case I was struggling. So, for that, I am very grateful and also very proud to support this Club. To work here is an honour and a privilege.” Jordan, who attended matches with his dad before starting at Everton, was keen to pass on a message to other supporters. He said: “To anyone who has autism and wants to visit Goodison to watch a game, just come! “The Club really cares about people with autism. If there was someone struggling, or if it gets too noisy, just come to me or anyone else and we’ll help you out and we’ll talk about it and see how you feel. “Because this Club will help you and once Everton has hit you, you will never be the same again.” Nigel Bennett, Chief Steward, said: “Jordan is Everton through and through – his enthusiasm for the Club and his work rate is astounding. Everyone at the Academy was extremely impressed with him, so when he applied for a permanent matchday role we were in full support and he’s since made a huge impact on the fans and staff.  “We’re proud to employ people from all backgrounds, including those with learning disabilities, and what better time to celebrate Jordan and thank him for his hard work, than on National Autism Awareness Day.” 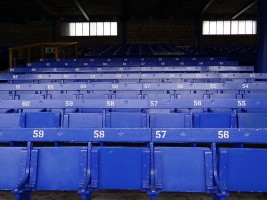