Congratulations to Plymouth Argyle Disabled Supporters club committee who have been named Sports Volunteer of the Year at the 2014 Inspiring Volunteer Awards.

The committee received the award at a Plymouth University ceremony which marked the conclusion of the 30th anniversary of Volunteers’ Week.

It recognises PADSA’s hard work and commitment given freely on behalf of the Pilgrims’ disabled fans.

The Inspiring Volunteer Awards, organised by Plymouth Guild in partnership with the Herald, highlights some of the many people who give their time tirelessly for others.

PADSA secretary Susan Clark said: “We were really surprised we won and we had a wonderful evening with so many others who give up their time for volunteering.” 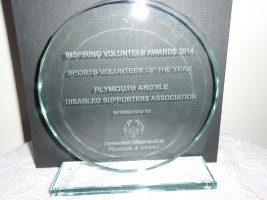