Four of the best-known business brands in Britain have refused to criticise the Premier League for its “glacial” slowness in improving access to football grounds, despite concerns raised by a disabled peer.

Lord [Chris] Holmes, a Conservative peer and retired Paralympian, told the House of Lords earlier this month that he would write to sponsors and partners of the Premier League to suggest they withdraw their support if clubs do not do more to improve access for disabled fans.

Lord Holmes, who is now disability commissioner with the Equality and Human Rights Commission, said that sponsors should “consider their connection and relationship to football and how that fits with their ethical state” if clubs do not make progress on access and disability discrimination.

He described the Premier League’s progress as “glacial” and “shambolic”, and compared its performance on access with the “brilliant brands, fabulous market leaders with great corporate social responsibility programmes” that sponsor and support the game.

Peers were debating a private member’s bill which would give local authorities the power to refuse a safety certificate to sports grounds which do not comply with accessible stadia guidelines.

This week, Disability News Service (DNS) contacted four of the Premier League’s leading sponsors and partners – Barclays, EA Sports, Carlsberg and Nike – to ask them what they thought of Lord Holmes’ remarks, and whether they would consider withdrawing their financial support from the Premier League if it failed to make substantial progress on access and disability discrimination.

So far, none of them have criticised the Premier League.

Barclays said that its chairman had replied to Lord Holmes’ letter, but that the company had already decided to end its sponsorship at the end of the 2015-16 season “for commercial reasons”.

He said Barclays wanted stadia to be accessible and had been running accessibility workshops with clubs “to show them what we have done to tackle the challenge” of improving access.

He added: “The Premier League overall has been very positive for us as a partner. However, as with all partnerships, there are things that each partner wants to happen more quickly.

“We will work within that partnership to try and get progress, especially on important issues such as accessibility.”

A spokesman for Carlsberg said it had “duly noted his concerns and passed them on to the Premier League”, which had “informed us that they continue to work with all member clubs on a range of accessibility initiatives”.

He said that Carlsberg “remain committed to our Premier League partnership” and was “an equal-opportunities employer and a sport-loving company” and so believed that “disabled fans should have the best possible access in order to enjoy live sport”.

He added: “As a marketing sponsor, though, we’re not best positioned to evaluate the progress being made in this area.”

Nike had failed to respond to the questions from DNS by 11pm tonight (30 July). 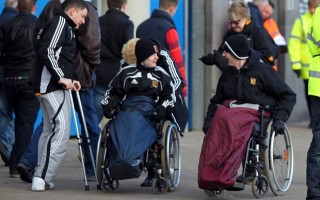