BBC Sport – Disability in football: Is the game doing enough to include all supporters?

Football is the world's game and it should be for everybody.

But as the sport strives for equality, what is the experience of watching matches like for disabled supporters in 2020?

According to European football’s governing body, UEFA, 50% of people who live with a range of conditions have never participated in leisure or sporting activities, and a third have never travelled abroad or been on day trips.

“We need to understand why people are not going to watch football or not taking part,” says Owain Davies, chief executive of charity Level Playing Field, which campaigns for greater access to sporting events.

Stephen Miller is a Paralympian and season-ticket holder at Newcastle United.

Stephen Parry is father of Morgan, a 23-year-old Bolton Wanderers supporter who has been to all 92 Premier League and EFL grounds, numerous international tournaments and has begun ticking stadiums in Scotland and Wales off his list.

Both Miller and Morgan Parry have cerebral palsy and are wheelchair users.

Their match-going experiences have not been particularly difficult in terms of reception from fellow fans, though a few common themes have arisen.

“In general, disability awareness has improved,” Miller says. “But I have experienced people standing in front of me and refusing to move. People don’t understand why I’m asking them to sit down. It’s because I can’t stand up.”

Parry adds: “Some of the newer grounds are designed on the assumption that everybody is sitting down, but people stand up when they get excited. If someone is going down the wing and they’re about to cross the ball, people stand up. Of course, you can’t see the game.

“There are quite a lot of grounds where the sightlines for wheelchair users are not good and it impedes your enjoyment of the game.”

Davies says understanding and awareness of the difficulties disabled people can experience at football has developed among clubs since a Premier League pledge in 2015 to make all stadiums in the division accessible by the 2017-18 season.

There is also the equality and diversity standard, which they must adhere to, while the English Football League has a code of practice in place.

In Scotland, clubs must follow criteria set out in their annual licensing manual, composed with Uefa, which outlines the need for each club to conduct a disability risk assessment, appoint a disability access officer and create a specific policy.

“As an organisation, we have seen progress,” Davies says. “You only need to look at the Premier League pledge five years ago and the completion of that in 2017. There are so many knowledgeable club staff members about access and inclusion, who we openly lean on about certain processes they put in to help disabled fans.”

But while willingness to cooperate appears a strong point when it comes to disability awareness, funding remains a huge issue.

“Perception and culture are obviously important, but disability is one of the areas where there is a capital spend required to make it accessible,” Davies continues.

“It is very expensive, and that is the hurdle where a lot of clubs stumble. We have to be aware of that, but it cannot be an excuse.”

Parry says Bolton’s well-documented financial hardship, having fallen out of the Premier League and down to League Two – narrowly avoiding liquidation earlier this year – has contributed to their lack of access development.

“There aren’t many more facilities at Bolton now than when Morgan began going to games in 2004, but the club culture is always very positive,” he says. “Morgan is known there very well. When he was younger, he was sensitive to noise, and we were very lucky in that there was a hospitality space behind the corner flag that was given up for wheelchair users.

“It is an elevated viewing position, behind glass and it muffles the sound. The club were great at reacting to that problem, and that is where he has been ever since.

“You have to particularise for your club. The stadium is a bit out of date in terms of access problems, and the new owners want to put money into the infrastructure as well as the team. They are committed to adding a Changing Places toilet, which can fit a wheelchair and two carers and is fully accessible.”

Miller highlights transport to stadiums as a huge issue for some disabled fans. While he says Newcastle are very keen to offer support, it is difficult for the club to help in this area.

“Newcastle have a designated disability liaison officer who is our main point of contact. We have regular meetings and it is a two-way communication. I have a parking space and someone drives me, so I can get to most games, but I know people who don’t go to night games because of transport issues.

“That is one area that can improve. St James’ Park is on top of a hill and isn’t the easiest place to get to. There’s only so much the club can do.”

‘There is a long way to go’

Alex Brooker, co-host of The Last Leg on Channel 4 and subject of the BBC documentary Disability and Me is an Arsenal fan. He was born with no working fingers and had his right leg amputated in early life and says the coronavirus pandemic has taken its toll in terms of the acknowledgment of disability in wider society.

“There are a lot of barriers and there is a long way to go,” he explains. “It still feels like we are getting left behind.

“The coronavirus situation has made staying in and not going anywhere a reality for lots of disabled people because there isn’t access to many places.

“With disability, it only becomes an issue when people are aware of it and you want people to be proactive. Arsenal are very good in that sense, they are forward thinking. They have a sensory room, for people with autism to enjoy the game in an environment that is more conducive to their enjoyment.

“It is about backing what you can do, and I’ve always been a big believer in that.”

Miller and Davies add that improving awareness and the ability for anyone to choose what they do are important for a better future.

“All we want is choice, where people can do what they want,” says Davies. “It is really important. Things have accelerated since the pledge, people are getting in touch and having a more active discussion.”

“There is a big push for equality, and disability is definitely a part of that,” Miller says. “It is on the people involved to keep banging the drum and keep that awareness going.” 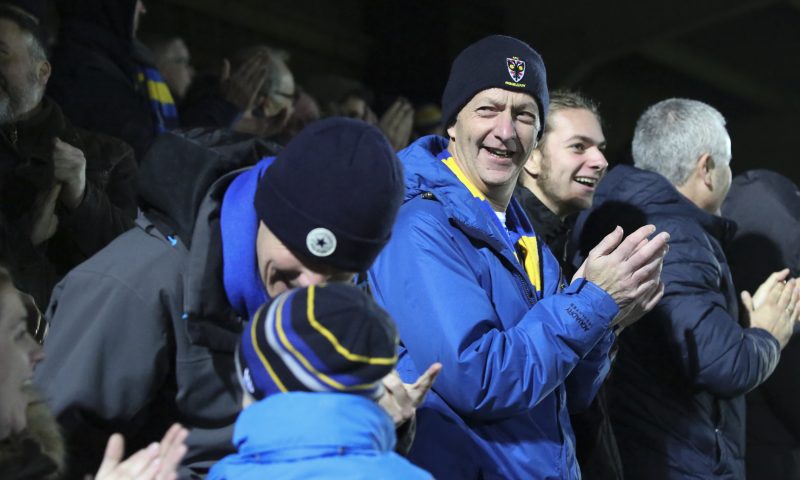