Birmingham City joined in the Weeks of Action celebrations by introducing their new matchday Disability Liaison Officer to fans as the clubs ‘Game Changer’.

Simon Hall will work on matchdays to assist and support disabled fans with their access requirements and the club used their home fixture with Newcastle United to introduce him to the supporters he will be working with at St Andrews.

Customer Services Manager/Supporter Liaison Offer Rachele Johnson said: “I’m delighted we were able to promote such a fantastic cause at Saturday’s fixture”

“It was great for everyone to meet Simon and he was made very welcome by all supporters.  “The Club wholeheartedly supports this initiative and we look forward to helping them in the future as much as possible.”

To also help support the campaign, Club Captain Paul Robinson, striker Clayton Donaldson,  Simon Hall and Ticketing Manager Aamir Javaid joined a group of fans in wearing t-shirts to support the Weeks of Action campaign. (pictured)  Messages on social media and the big screen were also shown ahead of the match. 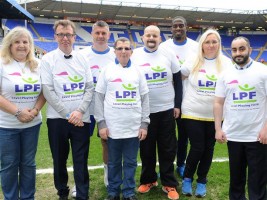