Blackburn Rovers once again celebrated Weeks of Action on the club’s annual ‘One Rovers’ day.

One Rovers day is the club’s annual celebration of their commitment to inclusion and diversity and to fighting all forms of discrimination.

The following is taken from Rovers matchday programme when they took on Bristol City at Ewood Park on 23rd April:

“When we say everyone, we mean everyone, regardless of age, disability, race, sex, religion and belief, sexual orientation, gender reassignment, marriage and civil partnership, pregnancy and maternity/paternity.”

“Last October, the club launched its ONEROVERS campaign to promote inclusion, value diversity (it would be boring if we were all the same) and remind everyone that football is for everyone and discrimination will not be tolerated at Ewood Park.”

“All involved with the club have the right to be treated with respect. The club recognises it has an active role to play in ensuring players, offi cials, staff, fans, customers, members of the community, partners and other stakeholders value and encourage diversity, promote inclusion and end discrimination.”

Before the game, members of Blackburn Rovers Part of the Crowd – Access Matters consultation group and children from Blackburn Rovers Community Trust carried the LPF Weeks of Action banner and received a warm reception from the crowd. 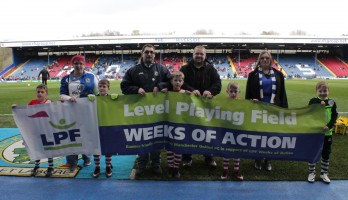