This year’s Blackburn Rovers Disabled Supporters Club Christmas party was a total success as more than 300 filled out the Premier Suite at Ewood Park to enjoy the festive celebrations.

The club’s new manager Paul Lambert, as well as the entire first team squad attended the party, and were on hand to pose for photo’s and sign autographs for fans.

A spokesman for the club said, “The Christmas party is one of the biggest events of the club’s social calendar and this year was no exception.

“Being relatively new to the club, Paul Lambert saw this as an ideal opportunity to meet dozens of supporters.

“The playing staff were glad to attend and join in the fun.”

From the Lancashire Telegraph 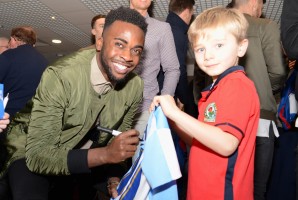