The 60-year-old is being talked about all around the world after a video of him driving his mobility scooter onto the pitch on Saturday went viral on Twitter.

It came as almost 300 fans were camped in the centre circle to protest Karl Oyston’s running of the club.

As Pool fan of more than 20 years his rush of blood to the head has resulted in instant online fame.

“I’m amazed really, people have told me the video has been mentioned in America and all over the world, I can’t believe it,” he told The Gazette.

The protests eventually resulted in Saturday’s game against Huddersfield being abandoned just three minutes into the second half.

While Pool’s final position at the bottom of the table is a big annoyance to most, for Mack he’s just as concerned about comments made by Oyston to a fellow fan by text.

Oyston referred to a supporter as a ‘retard’ and told him to enjoy his ‘special needs day out’.

Its something which clearly angered this disabled fan.

Mack said: “I was doing it to get back at Mr Oyston, my legs might not work but my brain certainly does. The facilities at Bloomfield Road are diabolic for us disabled fans. It’s not good enough and his comments were very offensive to disabled people.”

Full story at The Blackpool Gazette 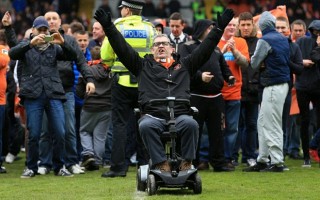