Blog post from 7500 to Holte on the recent news of a new viewing platform for wheelchair users at Villa Park, meaning some season ticket holders will be relocated next season.

One of the biggest (and perhaps least talked-about) problems at Aston Villa is the lack of seating for disabled fans. Aston Villa have been woefully behind the number of seats required by law for a number of years, and have seemingly been reluctant to address the issue. This past fall, however, we saw the first steps towards allowing more access for everyone who wants to watch Aston Villa as the club agreed to work to get in line with legal standards.

It has now become public that Villa plan to make more room for disabled fans by installing a viewing platform to accommodate 50 more fans in wheelchairs and their personal assistants. The stand will take the place of seats in rows L through R in the lower section of the North Stand. Here’s the letter than season ticket holders in that area received.

And let me make one thing very clear here before we even dive into this: this is a great move by Aston Villa. According to the website Level Playing Field (which serves as a watchdog of sorts for this issue), Villa Park currently has 74 spaces for home fans and 8 spaces for away fans. Those numbers are well short of the 182 and 32, respectively, under existing minimum standards. 50 additional spaces doesn’t quite get us there, but it’s a good start.

So, the club is doing something good and long overdue. Fans must be happy, right? Of course not. On twitter, plenty of fans from the section set to be closed are complaining. You’ll find plenty of comments like this.

I can’t even imagine being in a headspace such that I thought “Aston Villa are letting more fans come who wouldn’t otherwise be able to, and I’m pissed because I’ve got to find a new seat.”

But that pales in comparison to this hackneyed piece of myopic writing put up by the blog Villa Mad. Let me give you some choice lines:

“While providing disabled access is laudable and legally necessary, these plans amount to barbarism.”

Oh, they were so close. If they had just said “this is laudable and legally necessary” and ended their post it would have been great. But no, this is barbarism. Allowing people who, due to life’s circumstances, are wheelchair users to come to Villa Park and cheer for the team they love is barbarism. Remember, “barbarism” is “extreme cruelty or brutality.” To whom are Villa being extremely cruel or brutal? Is it the fans who will have to move? Because it sure as hell isn’t the fans who might, for the first time, actually get to watch the team live.

“The North Stand Lower fans can be very vocal and often banter with the away support. Ripping out the back seven rows of what is already a shallow area will kill that atmosphere stone dead.”

There are a couple of things going on here. The first is the assumption that disabled fans will not be loud and will not banter. There is literally no evidence of this being true. One of the loudest individuals I know (who could swear and banter better than anyone I’ve ever met) was an amputee and wheelchair user. He was my step-grandfather, and he took me to local college basketball games and showed me that being a fan means yelling until you’re hoarse.

And why should disabled fans be denied the experience of sitting in a stand that provides vocal banter and support? Why should they not get to be a part of the Aston Villa matchday experience?

There’s also another issue here. “It’s loud and we like it” apparently trumps “we can provide access to those who otherwise wouldn’t have it.” For all of the talk about caring about the club, this is a bunch of chest thumping that really only proves that the writers care about themselves.

“Yet another example of terrible Villa decision making where the needs and desires of the loyal fan come last.”

What you ACTUALLY meant to say in that sentence was that this is “Yet another example of terrible Villa decision making where they didn’t think about my delicate feelings and now I’m mad and going to be very angry about it.” THAT sentence more accurately reflect the selfish, petulant tone you have.

Let’s clear something up here. Losing rows of seats in any one stand will not hurt the atmosphere in a disproportionate way. What hurts the atmosphere at Villa Park is poor performance on the pitch and in the board room that leads to declining ticket sales and angry, bitter fans. Those are things that Villa can control.

But if the issue at hand is “how can we provide more seats for disabled fans?” my answer is “do anything you can to make this right.” If Aston Villa had said, “We’re taking out the back ten rows of the lower Holte to accommodate disabled fans” I would have responded with a “GREAT DAMN IDEA.” In fact, I quite honestly hope that part of the Holte End is worked to accommodate disabled fans. Let them sit in, and enjoy, one of the most storied stands in all of football.

And if you’re complaining about having to move so that people who wouldn’t have gotten to enjoy the match get to, you need to reconsider your priorities in life. You’re a selfish, petulant child who has no regard for others, and I hope something wakes you up and fixes that. Because this attitude that I’m seeing right now from certain fans? It’s equal parts disappointing and loathsome. Be better than this. It’s what a decent human being would do. 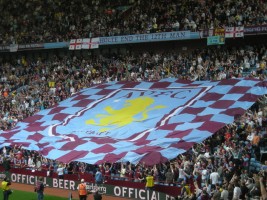