Blog: 7500 to Holte – One man’s struggle to support Aston Villa because of his physical disabilities

In a further blog from 7500 to Holte, Ian Burnip writes about his experiences of following Aston Villa as a wheelchair user.

It has been a hard season if you’re a lover of the Claret and Blue. Attendance has plummeted, goals are rare and the player’s mentality has made lemmings look happy-go-lucky.

In a week that has seen board members go, our club captain suspended and 500 loyal servants not responsible for the shambles of AVFC’s season laid off, there was one uplifting piece of news – Villa are to build 50 more wheelchair spaces. For those of you who don’t have need for such things, then it may seem insignificant. Please, trust me when I say, it really isn’t.

Being a disabled fan is incredibly difficult at times.

Since the Trinity Road Stand was redeveloped, there has been a waiting list for Season Tickets for wheelchair users. I was lucky. I got a half season ticket as a 14-year-old, and now, 15 years later, I’m still a season ticket holder – despite living around the country, and working in an industry where we work a lot of Saturdays, so I end up missing quite a few matches.

Because we are so oversubscribed, I wouldn’t risk giving up my season ticket and going when I can. But what’s even worse than me not being able to go, is that there’s a generation of kids, new, prospective Villa fans, being denied access.

Don’t get me wrong, Villa Park is really rather good for home fans (away fans still have to sit in among the home fans.) The view in the Trinity isn’t bad. And the fact the seat for your PA is next to you, is a bonus (imagine sitting behind your wife/husband/partner/friend – not as enjoyable, is it?)

Sadly, it isn’t the story across the country. Following our club away for disabled fans is nearly impossible.

We have five away scheme members/regulars. We would have more, but that’s the maximum allowed, as most allocations are five-ish. Five. Most of you complain when there’s only 1000 seats.

Five is the same number of places as you have in your car, or on your two piece suite from IKEA.

There are so many grounds I’ve given up trying to get to, for that precise reason. Why spend time calling, when you know the answer?

Then there’s the view. Most disabled fans are shoved at the front. The front isn’t great – but it would be OK.

When we score, disabled fans get crushed in the surge forward. I’ve seen fans get tipped over by exuberant fans. I’m all for exuberance but have some common sense! I actually won’t go to certain grounds anymore, because I’m sick of getting bumped and bashed. There’s no need for it.

Bournemouth, Southampton, Blues, all gone because of myself or others getting caught up in the melee.

Oh, and then there’s those of you who went to Wycombe for the preseason last year and refused to step back/go back in the stand so I could actually see the goal – I paid the same amount as you guys, but your thoughtlessness about how little choice I had where I sat, was tantamount to saying that I didn’t matter.

Of course, there are grounds where disabled fans aren’t at the front. Everyone can remember that penalty by John Carew, at Reading in 2010? I remember seeing it for the first time, a few hours later on MOTD. I was there, but sadly all I could see was people’s lower backs. Same with Stoke.

Now, a lot of these issues are to do with poor design. But, have any of you ever noticed?

Have you noticed how at Leicester if one wheelchair user wants to pop to the bathroom the entire platform needs to leave the platform and miss some of the game, because there’s not enough depth for one chair to pass the other?

I have lost track of how many times I’ve snuck in the home end in order to see my beloved Villa. In fact, I’m doing it at one of our upcoming games…

Oh, and if you want a beer at many grounds, such as Chelsea, you can’t. The bar is inside, up/down some steps. Even Highfield Road was better than that, and that was a relic of a bygone era.

We need more options. More choice. More seats! Only that way will more kids go and enjoy their experiences. We need more fans, not fewer. Now, more than ever. Villa are taking a step in the right direction, finally. I just wish you’d all realise how lucky you are to not have to think about anything except how many pints you’re going to drink in the nearest ‘Spoons. 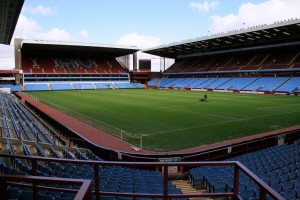