As we’ve done on most match-day afternoons since 2007, my wife and I arrived at Stadium MK on 9th April in good time for the 3.00pm kick-off between MK Dons and Rotherham.

Parking is good for us: we arrive at the stadium with our Disabled Parking permit (supplied by the club free of charge) on show and my wife can park in a designated area within 50 yards of our level access gate.  We hand over our season tickets for the stewards to put through the turnstiles – and we’re in!

First stop, as usual, was the Customer Service desk en-route to our seats to pick up my headset for full commentary on the match.  The headsets themselves were provided to the club by SoccerSight back in 2010, whilst the commentary is provided by volunteers from Milton Keynes Hospital Radio, Martin Thorpe and John Creasey.  They have been commentating on home games since the stadium opened in 2007 for the benefit of patients and were only too happy to embrace the SoccerSight initiative alongside.  I was asked to test the system before it went ‘live’ and it’s been an invaluable part of my match-day experience ever since – my wife says it also helps her as she doesn’t have to try and explain to me what’s going on!

Once in our seats, it was time to test the headset and get my monocle into focus.  As the monocle only allows me to focus on a narrow area of the pitch at a time, the detailed information provided by Martin and John is invaluable in helping me locate and then follow the ball.  I can enjoy the game and get so much more from it.  Compare this to many away games over the years when no commentary has been available: after 90 minutes of trying to follow the game solely with my monocle, I feel so tired that it’s as if I’ve played the game, rather than watched it!

Where we sit also helps.  Our seats for home games, which have step-free access, are just to the left of the goal at the back of the lower stand (although the head-sets will work anywhere in the ground and are equally available to away fans).  With my monocle I can see to the other end of the pitch and don’t have to move my head side-to-side too much.  Fans around me, many of whom have had their seats for as long as we have, often turn and ask me who’s scored at the other end!

For many disabled fans, getting refreshments can be difficult or even dangerous.  Not so at Stadium MK, where staff from the nearest kiosk visit during the game to ask whether we’d like to order a drink or a pie etc.

At the end of the game, we hand in the headset so it can be recharged for next time.

All in all, a great way to spend our Saturday afternoons!

The Blind Faithful – What is it like to be a blind football fan? 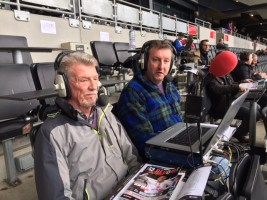