Blog: What difference does a platform make?

Whatever happens in the final few games of the season, Wrexham fans can look back on a successful 2015/16 campaign with a well-earned sense of pride and achievement.

In January, our fan-owned club posted an operating profit for the first time in 15 years and last month Supporters Trust members voted overwhelmingly in favour of agreeing a 99-year lease with stadium owner Glyndwr University. Such progress shows the potential and ambition of our community club – a club that is open to everyone as shown through the remarkable work of the Disabled Supporters Association.

This will probably sound strange to most people, but one of my most cherished memories of 2015/16 came when we lost 1-3 against Woking at the Racecourse. It was a cold, dark and dismal January afternoon that I would have usually spent at home watching Final Score, but due to the fact that the DSA had worked tirelessly to open and maintain the swanky new viewing platform I was able to watch the match without getting drenched and with an excellent view of proceedings.

Dominic Vose scored a sublime free-kick, I got to meet the First Minister Carwyn Jones and I was also able to be a part of the crowd – it may have been a disappointed and disgruntled crowd, but at least I was part of it.

The viewing platform has been a major success story for the club as a whole. It has drawn positive attention and admiration from the football world and beyond with visits from Lord Faulkner and Carwyn Jones, articles in the national press, plus a feature on the BBC national news. This new facility has also encouraged a push for clubs at the top of the game to follow the example we’ve set and has helped inspire the Accessible Grounds Bill that is currently going through the House of Commons.

The work that the Disabled Supporters Association has done is clearly not just benefiting Wrexham fans but disabled fans throughout the game. We can all be proud of this as all the work of the DSA relies on the generosity of sponsors, volunteers and fellow fans.

We do not want to rest on our laurels though. There is still much more work that needs to be done to make football matches accessible for all. I encourage everyone to get involved in this as there are many projects being run by the DSA and Wrexham Supporters Trust to help ensure our whole community can enjoy being part of our forward thinking community. We need help and support to establish a hearing loop at the ground, are currently working to become Dementia Friendly and recently held a Football v Homophobia day at the Racecourse.

In addition to all this we also need to keep pushing ahead with plans to build more viewing platforms. At the moment, we only have space to accommodate ten spectators who are wheelchair users per match, but demand is far greater than this meaning that we have to operate a rota system.

Therefore, supporters who are wheelchair users cannot access the platform on a regular basis even though they want to support the club they love at every home game without having to put up with a poor pitch-level view and the risk of getting soaked. We also need to consider the needs of opposition supporters as everyone should be accommodated for at our stadium.

The DSA is currently approaching architects to design and price a second viewing platform to be built at the Racecourse. We have already shown other clubs the way forward with our wonderful facilities, but need to continue this good work to open our doors to everyone. 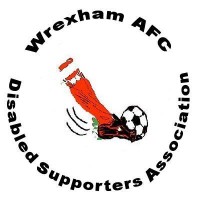