Last week, the CAFE Week of Action 2017 – Total Football Total Access – took place across Europe as national associations, leagues, clubs and fans groups were invited to celebrate the importance of access and inclusion.

This season, an even greater number of countries have been represented in celebrating Total Football Total Access.

Level Playing Field has coincided its own Weeks of Action to take place during the CAFE Week of Action, joining the wider celebration of access and inclusion across Europe and beyond.

Total Football Total Access has been celebrated in 20 countries this season, and CAFE’s message of #totalaccess continues to spread far and wide.

One of the highlights of this season’s initiative included a pre-match ceremony at FC Barcelona, which was broadcast around the world and included Barcelona’s first team players standing with young disabled fans on the pitch promoting the message of Total Football Total Access.

Former Manchester United, Real Madrid and Dutch international striker Ruud van Nistelrooy discussed the importance of access and inclusion with UEFA. Ruud gave his support to the CAFE Week of Action, and his video interview can be viewed here.

CAFE also hosted a disability access and inclusion workshop partnership with the Malta Football Association. This included access appraisals of a number of Maltese stadiums, as well as a presentation on the importance of the Disability Access Officer role and disability inclusion and etiquette training. Read more here.

For further information about CAFE and the CAFE Week of Action, please visit www.cafefootball.eu. 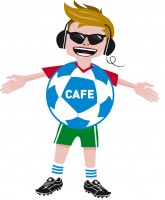