A London based Carlisle United supporters club has raised £2000 to improve facilities at Brunton Park, including providing Audio Descriptive Commentary for blind and partially sighted fans.

The fundraising effort by the 40 Club was set up by the London Branch to mark their 40th anniversary celebrations.

Branch chairman Ian Jardine said: “Although the aim was to get the 40 Club up and running and break even during the first year, it proved to be a great success, and a cheque for £1,500 was handed over on the final match of the season.

“The second year has seen consolidation and the donation from the proceeds this season will be used to enhance facilities for disabled supporters as well as giving a boost to the media department, which is vital to the exiled supporters.

Carlisle United media officer Andy Hall added: “The London Branch made it clear from the outset that they wanted their fundraising efforts to benefit the fans – and the decision to help with the upgrade of disabled facilities fits in every way with their aim.

We are looking to purchase commentary equipment in the very near future and this gesture makes that aspiration a reality rather than just a possibility.” 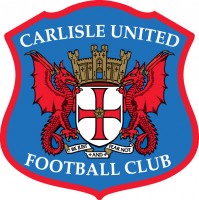