A cast of sport’s leading voices in governance, inclusion and anti-discrimination gathered at an office on Olympic Way yesterday to mark the opening of the new CAFE and LPF headquarters.

Both organisations campaign for better access for disabled sports fans domestically and in Europe, steered by CAFE Managing Director and LPF Chair Joyce Cook who was awarded an OBE for her efforts to the cause in 2012.

CAFE Chairman and LPF President David Bernstein CBE, the former Chairman of the FA, opened proceedings with special thanks to UEFA and his fellow honorary officers and trustees before handing over to Minister for Sport and Equalities, Helen Grant MP.

The Minister took the opportunity to mark the first five successful years of CAFE along with the continuing progress of Level Playing Field and the importance of their works to further access for disabled sports fans in England and Wales:

“I want to take this opportunity to pay tribute to Joyce’s leadership, dedication and passion. She, David and the team have inspired many people to care for and contribute to what CAFE and Level Playing Field do. Clearly there is more to do, and sport and football need to look at ways to increase the funding to support this important work.”

The gathering included LPF Vice Presidents, Lords Faulkner and Rosser, Kick it Out Chair, Lord Herman Ouseley, FA Council and Inclusion and Advisory Board member, Paul Elliott CBE and a raft of UEFA, FA and sporting figureheads, all of whom were discussing how to assist CAFE and LPF in seeking inclusive access for disabled fans at sporting events.

UEFA’s Patrick Gasser made a special trip from Geneva to pledge their support:

“Ever since Level Playing Field came on to our attention in receiving the Brussels Fans Award in 2008, they have been on our radar.  UEFA and CAFE have published ‘Access for All’ in 2011, now available in 14 languages, which sets out our minimum standards and we are implementing a new UEFA club-licensing criterion from next season. This should see Access Liaison Officers at every Club and Association.” (UEFA’s flagship Finals and tournaments, with CAFE’s support are increasingly accessible with legacy projects running alongside to ensure access for all). “And we look forward to continuing to work together with CAFE to push this agenda forward.”

The event also saw David Davies OBE inducted as a CAFE Trustee and Level Playing Field Vice President, but the final word went to Joyce Cook who used her platform to lay down the gauntlet to clubs and their governing bodies:

“We’ve ensured this is on the agenda across Europe and beyond. But are we truly committed to this topic?”

In praising UEFA, whom she said have helped make “…the seemingly impossible become the normal”, Cook cited a number of examples in mainland Europe where access had been improved and where the numbers of disabled fans attending live matches was very much on the up.

“We have to be bold, continually learn from our successes but also to take responsibility. It’s not just down to the clubs; the governing bodies have a real responsibility here too and there’s no reason this topic shouldn’t be afforded the same credence as other forms of discrimination and regulation.”

“Let’s be clear, when a disabled person is denied access… it is painful, it is discrimination and exclusion in its worst form. That tells us, as disabled people, that we are some how less important, less valued, less worthy. Is that what we really mean? Is that the reputation we wish for our sports, our clubs, each other? Or do we seek true inclusion. It is time to step up. Please, it’s time!” 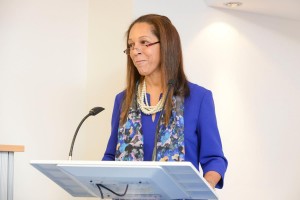