Crawley Town marked Level Playing Field’s Weeks of Action by inviting the newly formed Disabled Supporters Association (DSA) to a training session at their home stadium on Friday 1st May.

DSA members had the opportunity to watch the players prepare for their final game of the season against Coventry City before they met manager Dean Saunders and the club’s players. A prize draw was held for the home shirt of Lanre Oyebanjo. The event was attended by LPF’s Kieran Reynolds who spoke to members about to the DSA’s achievements and plans for next season before taking photos with the DSA, players and manager Dean Saunders.

Crawley Town DSA was set up in 2014 by Barbara Robinson and has worked closely with the club to improve facilities for their disabled supporters. Most recently, they launched a project to provide audio descriptive commentary.

“The members of our DSA group were delighted to watch the squad train for the crucial final game of the season. It was a very good session and they played well on the day, but sadly did not get the win we needed to stay in League 1. However we’re confident that our players will do us proud in League 2 and hopefully we’ll get promoted next season!”

“I had a lovely day at Crawley Town and it was great to meet the DSA to discuss their current and future plans. I would like to thank Crawley Town FC and Crawley DSA for supporting our Weeks of Action campaign”. 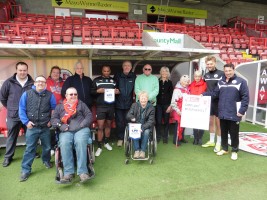