Level Playing Field is pleased to announce that David Smith has been elected as the Interim Chair of Crystal Palace Disabled Supporters Association (DSA). He will be joined on the committee by Tony Game, Samuel Birch, Karen Green and Caroline Bland. The committee was elected at an open meeting at Selhurst Park and they will now lead the setup of the new DSA with support from Level Playing Field.

Crystal Palace DSA will be the tenth DSA established during Level Playing Field’s successful Working Together Project.  Level Playing Field chief executive Stephanie Gadd and Project Coordinator Kieran Reynolds had visited the club last month to promote the project and outline the benefits of forming a DSA to represent the club’s disabled supporters.

Working Together project coordinator Kieran Reynolds said, “I would like congratulate David, Tony, Sam, Karen and Caroline after the election on Tuesday and look forward to working with them to take the DSA forward. I would also like to thank Crystal Palace FC and the Crystal Palace Football Club Foundation for their ongoing support”.

Season 2015/16 – How you can engage with Level Playing Field 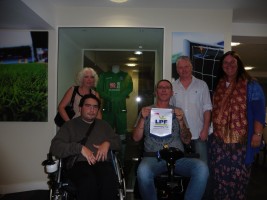