David Bernstein appointed as Board Member at Aston Villa

LPF President David Bernstein CBE has been appointed as a Board Member of English Premier League club Aston Villa.

David is a vastly experienced football director having previously served as Chairman of the Football Association, Wembley Stadium and Manchester City FC. David is also the Chairman of LPF’s European partner, Centre for Access to Football in Europe (CAFE).

Speaking after his appointment, Bernstein said, “I am delighted to have been asked to join the Board of Aston Villa… I have had 20 years’ experience in football at Manchester City, Wembley Stadium and as Chair of the FA and I hope to bring the benefits of this to Aston Villa… Aston Villa is a great club in English football and I will do all I can to help regain its place in the game”.

In addition to his experience in football, David is also Chairman of the British Red Cross and was awarded a CBE in 2014 for his services to football.

Speaking on behalf of the LPF team, Joyce Cook said, “We are delighted for David and send him our warmest congratulations on this appointment. David’s record in the game speaks for itself and he is held in the highest esteem by his peers including all of us at LPF”. 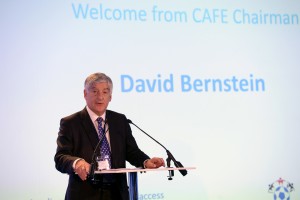