Working alongside The Rams Collection a ‘Baseball Ground Road Show’ was staged at the event as part of National Dementia Week, with Club Ambassador Roger Davies also in attendance, in order to provide a sensory and reminiscence experience and experimental activities associated with a trip to the Rams’ former home between 1980 and 1997.

A number of local organisations were on hand on the day to help develop new resources for patients living with dementia.

Providing appropriate sensory stimulation for Alzheimer’s disease and other forms of dementia has been shown in recent studies to decrease agitation and restlessness, as well as improve sleep. These symptoms are very common in most forms of dementia, and certainly in people with Alzheimer’s, so as a result sensory stimulation translates as improved quality of life for the patient as well as for the caregiver.

Further research also suggests that reminiscence therapy or “the use of life histories to improvepsychological well-being” (AmericanPsychological Association) are valuable psychotherapeutic approaches which can improve the mood, cognitive ability and well-being.

Find out more about Dementia Awareness Week by visiting: alzheimers.org.uk/remembertheperson 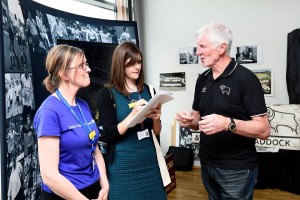