A disabled Arsenal fan has written an open letter to the Premier League expressing his concern at the way disabled fans are treated when visiting Premier League grounds, describing some stadiums as “beyond a joke”.

The open letter, published in FC Business magazine, was written by Glen Shorey who travels to both home and away games as a wheelchair user, and details just some of his experiences as a disabled supporter at Premier League grounds. These include lack of available wheelchair user spaces, poor sightlines as well as having to sit amongst home supporters at away matches. He concluded by calling the Premier League to take action to address the issues facing disabled fans saying, “wheelchair aside, we want to follow our team too”.

The Premier League responded to the letter in the next edition of FC Business magazine, which can be read here (Page 45)

Accessible versions of both letters can be obtained by emailing us at info@levelplayingfield.org.uk 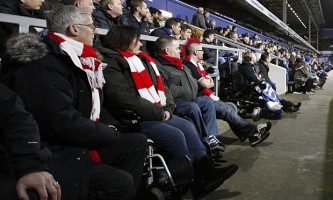