The story of how a blind Leeds United fan overcame fear and isolation through her love of football is the subject of a newly-released documentary film. Blind Faith was made in 2014 following a commission from Channel 4 and is now being released for public viewing via the Yorkshire Evening Post website.

The inspirational subject of the short film is Nikki Allan, who lost her sight in her 20s. Nikki, 62 and from Churwell, attends Leeds games home and away with her faithful guide dog Rita.She told the YEP: “Going to matches leads to a rapid diminishing of the feelings of isolation and frustration you can experience as a disabled person. “It’s a family atmosphere following Leeds – I have always been treated very well by other supporters, I have never suffered any discrimination from them.” The three-minute documentary’s director, Glen Milner, said: “I’m really pleased that Blind Faith is now finding an audience through the YEP website.” Glen, who is a Leeds fan, added: “I think the subject matter is important as it shows how the togetherness and passion of supporting a football club can make a big difference to people’s lives.”The documentary includes footage that was filmed with Nikki at United’s Elland Road ground. It also features some of the Yorkshire Radio commentary that Nikki listens to when she is at matches. For further infomation about Glen’s directorial work, go to the www.glenmilner.com website.

You can watch the film here. 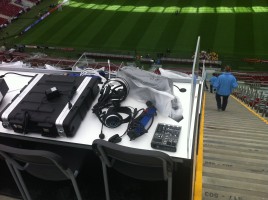