A woman was “quite shocked” when an eagle flew into her living room while she was watching the French Open tennis championship. The 15in (40cm) tall Russian Steppe eagle swooped through an open door of Wendy Morrell’s Poole home while she was watching television on Sunday. She described it as “stunning to look at, but quite scary”.

Local bird rescuers captured the creature, named Boris, which been reported missing two days earlier. Boris was recaptured by Wessex Bird of Prey Rescue. Ms Morrell said the eagle swooped in as she watched Rafael Nadal play Novak Djokovic.”This huge black thing flew into the room and did a low swoop,” she said.

Wessex Bird of Prey Rescue, which carried out the collection, said Storm was being trained to scare seagulls away from a landfill site in Corfe Mullen. He had broken away from the perch where he was tethered after being spooked by a lorry. 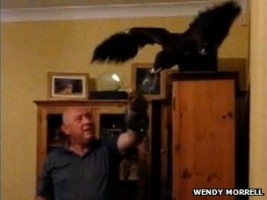