Phil Neville’s wife has told how the vile Twitter trolls targeting her family with a torrent of abuse has left her feeling terrified.

Julie Neville, her former England football star husband and even their disabled 11-year-old daughter have suffered a string of attacks as well as death threats from online cowards hiding behind anonymity.

But while being bombarded with vicious tweets was bad enough for the couple, they were left devastated when the trolls started targeting daughter Isabella, who has cerebral palsy. The pair were told by doctors the ­youngster would never walk, but she defied the odds and now gets around with splints.

Julie said: “We had someone tweet saying they were selling T-shirts captioned, ‘Phil Neville’s daughter is a spastic, a cyclops and has eight toes,’ asking us if we wanted to buy them.

“Death threats and rape threats are bad enough, but when people start abusing our daughter, that is ­something else. I was sat in bed watching TV when the tweets came through. I felt ­physically sick to the pit of my stomach and it kept me awake all night. I simply replied, ‘Shame on you’.

“But Philip retweeted it and they ended up receiving threats from other fans.

“It is beyond belief. The only mercy is that Isabella isn’t old enough to read Twitter. Ignorance and abuse like that could damage someone for life. Isabella is a bright, brave, beautiful little girl and we tell her that she can do anything that she wants to do. What right have these people to abuse her just because her dad is in the public eye?

“If she was to read the messages how would she feel? Luckily she is a strong person. I saw an actor from Breaking Bad talking on TV about his disability. He spoke so eloquently about how these bullies and outsiders don’t realise his disability is his greatest strength.

“People like Isabella overcome such adversity on a daily basis that mean words are the least of their worries. But to a child like Isabella, and us as her parents they still hurt.”

“Twitter is a fantastic tool, you can learn so much, interact with so many people and it makes the world a smaller place. But the downside is that people have no social responsibility. They think they are faceless and nameless because they are hiding behind a keyboard. They are just cowards.

These people would never come up to my face and say these things, so why do they feel it is acceptable to do it online?

“I might tweet ­something random like I am going to meet my mum for lunch, and then I will get people tweeting me back calling me a f****** ugly slag. How is that normal behaviour?”

New UK laws brought in earlier this year mean internet trolls can face up to two years in jail. It means a stiffer penalty for anyone convicted of sending abuse. Previously, police had to rely on outdated laws including harassment legislation which sometimes led to cases eventually being dropped.

But Julie does not believe it goes far enough and is calling for even tougher restrictions and harsher sentences. She said: “A jail term and monetary fines would be a good deterrent.

“But these need to be implemented. Yes, there may be a few high profile cases whereby trolls have been ­prosecuted. But these are the minority out of the hundreds of thousands of trolls abusing people on a daily basis with no comeback.

“I have never reported any trolls. I suppose because I have never felt that it would lead to anything, or that my case would not be treated seriously as if they were letters through the post or face to face abuse in the street.

“Philip is much stronger than I am. He can ignore the abuse and if there is a particularly bad patch he will just come off Twitter for a few days and let it die down. I can’t. I am not strong enough to read these horrific tweets without it affecting me and getting me down.

“The trolls need to take a long hard look at their behaviour and think about the effect it may have on those they are targeting. It isn’t just a bit of a laugh.

“It can have a serious effect on people’s lives.” 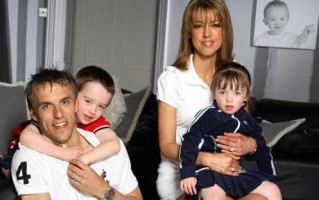