A social media campaign to give a Noah Cunningham a great 12th birthday was a huge success as the youngster received over 1000 cards wishing him a Happy Birthday, as well as being invited on to the pitch at Goodison Park before the Toffee’s FA Cup 3rd round tie with Dagenham & Redbridge.

The campaign urged fans to send Noah as many birthday cards as possible, and fans from Everton and many other clubs obliged with the final count coming in at 1152 to make Noah’s 12th birthday a very special occasion.

Noah, who has Duchenne muscular dystrophy and is a wheelchair user, was brought onto the pitch before the match and was met by Everton legend Duncan Ferguson who presented him with a card signed by all of the first team. Noah’s birthday was also announced on the PA and a message was shown on the big screens a number of times and was met by loud and prolonged applause by the crowd.

Noah’s mum, Vicki Cunningham, said: “Thank you so much to everyone who has given him or sent in a card. It really does mean a lot, and it looks like we’ll be opening them for weeks.

“Noah just loves Everton so to go on the pitch and meet Big Dunc was incredible for him and it has all been very overwhelming”.

Everyone at Level Playing Field hopes Noah had a fantastic birthday. 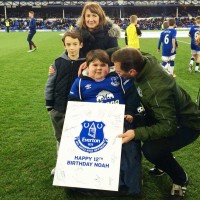