The U.S international shot stopper met the young males from the team currently sitting third in the WFA National League in the Championship Division before being provided with his own wheelchair and talked through the mechanics of how to operate it and the rules of the game.

Once Howard was up to speed with his chair then Everton in the Community Disability Manager Steve Johnson and charity apprentice John Hughes led the team through some short skills including dribbling and shooting practice before the Everton keeper took his place in goal for a short sided game.

Speaking after the session the 36year-old said, “I’ve really enjoyed myself, the guys were great with me and were really helping me along as it was my first time in a motorised wheelchair. They were giving me tips and encouragement when it came to dribbling, passing and shooting. It was a good time. There are a lot of talented players in this team and it goes to show that practice makes perfect and hopefully they’ll have me back so I can slowly but surely perfect my skills.

“It’s been great for me to come out and see not just what Everton in the Community does but to also be a part of it and lend a helping hand. Our charity means everything to this club and our local community and that’s why us players are always so eager to get involved and be a part of Everton in the Community because we know what it means to everyone.”

Steve Johnson added, “Tim has been absolutely superb with us today and his skills in the chair were very impressive given that this was his first time. He mixed in well with the team and pulled off some great saves at the end.

“It’s great to have the club’s involvement and support; Tim is a hero and role model to many of our players here today and to have him come down and get involved today with our session is something that they will talk about for weeks on end.”

Formed in 2007, the powered wheelchair team has accommodated almost 40 players since its inception and is sponsored by Medicash and the James Greenop Foundation whose backing has provided the team’s coaches with more funding for training and equipment for the side who also compete in the North West Powered Wheelchair League at Liverpool Greenbank Sports Academy.

The team train weekly and many of the players have life limiting conditions which means that, for many of them, powered wheelchair football is the only competitive sport they can play. The programme raises their self-confidence and self-esteem as well as being good for their social interaction opportunities as many in the past have been isolated at home.

Leading Liverpool-based health insurer Medicash launched the Medicash Powered Wheelchair League in 2013 which will offer disabled players the chance to participate in regular, competitive fixtures. The sponsorship deal has enabled Everton in the Community to extend its sporting provision for disabled children across Merseyside as well as removing the traditional barriers which prevent disabled people from participating in sport.

The James Greenop Foundation have been working with the Club’s official charity since February 2014 and began a 12month sponsorship of the team in late 2014. Set up to create a lasting legacy of young Everton fan James Greenop who was tragically killed in a road traffic accident in October 2013, the Foundation embraces the mantra that everyone has the potential to achieve their dreams. By providing small grants and financial assistance, the charity aims to support and empower local children, young adults and families who are experiencing difficulties and disadvantages that prevent them from achieving their full potential as active citizens and valued members of society.

Everton in the Community’s disability empowerment programme is one of the largest and most respected in the world and provides football and physical opportunities for thousands of disabled children and adults each year. The programme is all inclusive and currently runs 13 disability teams available to those with any disability whether that be learning, physical, reduced stature, autism, cerebral palsy, deaf or partially sighted. 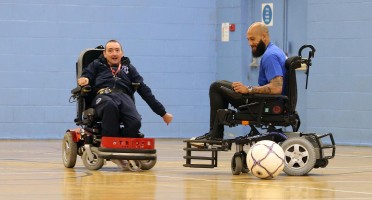