A Liverpool FC supporter has been banned from going near certain football grounds for three years following an altercation with the carer of a disabled fan at Steven Gerrard’s Anfield farewell.

The court heard that the 20-year-old refused to take down a banner that had a tribute to the LFC captain before the visit of Crystal Palace on Saturday 16 May 2015.

The banner was raised directly in front of the Disabled Supporters in the Kop. The court heard that fans often raise banners at that spot but normally take them down as soon as the players come on to the pitch.

The match was a special day for Liverpool supporters. It was the club captain’s last game and it had been widely publicised that there would be a special introduction and guard of honour for Gerrard before the kick-off.

The banner was bigger and different from the usual ones and the disabled supporters couldn’t see anything of the ceremony. Several fans told the match stewards who asked them to take it down.

But the men holding the banner wouldn’t and some started to raise their voices and become aggressive.

A female fan who is a registered wheelchair user moved near to the front of the stand to see the celebrations and found herself next to Poulter who was holding the centre of the banner.

Her husband asked him to take it down but he again refused, saying it had taken them a long time to make the banner.

As more fans asked for the banner to be removed, Poulter became more aggressive and startred to hurl insults, swearing and threatening violence.

The husband of the disabled woman took a photo of Poulter and reported his behaviour to Keith Graham, chairman of the Liverpool Disabled Supporters Association, who was sitting nearby.

In a Victim Personal Statement read to the court the man who had taken a photo of Poulter said the incident had left him and his wife fearful about attending matches in case there were repercussions.

He said he felt that, “yet again” a part of their lives that had been enjoyable was now the “complete opposite”.

Poulter denied a charge of using abusive or threatening behaviour / insulting words to cause harassment / alarm / distress but a District Judge found him guilty following a trial.

Senior Crown Prosecutor Alison Clarkson, who prosecuted the case for Mersey-Cheshire Crown Prosecution Service, asked for a sentence uplift because the offence comes under the category of Disability Hate Crime.

The District Judge agreed to this and added a night time curfew of 8 weeks to the football banning order which states that he must not go near to any ground where Liverpool are playing, home or away or any international game for three years. He was also ordered to pay costs of £500 and a court charge of £550.

Alison Clarkson said: “Poulter directed his insulting and threatening abuse at some of the most vulnerable fans in the ground.

“This was disability hate crime and the Crown Prosecution Service takes it extremely seriously.

“These fans, like Poulter, wanted to celebrate Steven Gerrard’s last game, but his refusal to take down this huge banner meant they couldn’t see anything of the ceremony.

“The fans affected are loyal and regular supporters of Liverpool Football Club and had every right to expect to be able to see the celebrations of Gerrard’s last game.

“His actions spoiled the occasion for several people and have left at least one couple feeling anxious about going to see the team that they love and have been going to see for over 40 years”.

Joyce Cook, LPF Chair said: “Level Playing Field welcomes the judge’s ruling which recognised the severity of this incident. The court agreed that the perpetrator had committed a disability hate crime towards lifelong Liverpool disabled fans.

“They had been looking forward to the last home match of the season and to celebrating the captain’s last ever match at Anfield alongside their fellow fans. This ruling sends a clear message that such threats towards disabled people are unlawful and that disability hate crime, much like other forms of discrimination, will not be tolerated at our football stadia”. 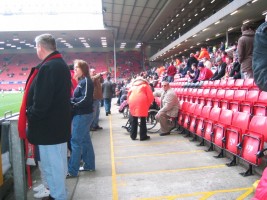