Manchester City Football Club are proud to get behind Fare’s Football Peoples fortnight of action designed to challenge discrimination and celebrate diversity in football.

The campaign, which runs from 9th-23rd October, aims to bring people together and make football accessible to everyone regardless of their age, race, gender or sexuality.

With blue’s midfielder Yaya Toure already pledging his support to the campaign, Manchester City have organised a range of exciting events and programmes to help give discrimination in football the boot.

The fortnight of action kicks off with a visit to the Teenage Cancer Trust Award by the EDS squad, followed by a ‘One City’ disability event which will focus on our wheelchair football provision in Manchester. There will also be an opportunity to hear from women players, physiotherapists and even photographers who work behind the scenes every day to make football an even more incredible sport.

Fans attending MCWFC v Chelsea on 12th October and MCFC v Spurs on 18th October will be able to show their support and learn a bit more about our ongoing support for both the Fare and Kick It Out campaigns and how they can be part of the change.

City’s media platforms will also be abuzz with even more updates and news from our Football People action fortnight. Like us on Facebook and follow us on Twitter to access our upcoming features on female role models, Village FC and for the opportunity to enter some exciting competitions.

Mike Green, Head of City in the Community, explained why we are such keen supporters of Fare’s Football People campaign:

“Manchester City are proud to be supporting Fare’s Football People campaign. The Club is committed to promoting equality of opportunity, diversity and respect across all its activities. From the programmes we deliver in the community to the way we operate, we continue to ensure equality is embedded within the heart of all our activities.

“City in the Community is passionate about empowering lives through football; providing opportunities for all is a big part of the work we do every day in Manchester. By engaging our staff and players in the campaign, we are excited to be highlighting the work we already do and the valued partners we continue to work with including Fare and Kick It Out.” 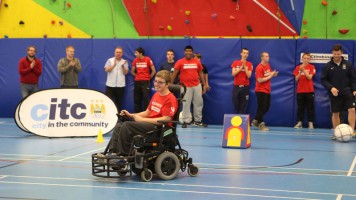