At the FIFA Extraordinary Congress earlier today, reforms were overwhelmingly approved that will see disability included as a protected characteristic within its Statutes.

The reforms to Article 4, in relation to prohibiting discrimination, were approved with almost 90% of national associations eligible to vote in favour.

FIFA Executive Committee Member Moya Dodd is a long-term advocate of the reforms to Article 4, and prior to the Congress had said, “The reforms simply have to pass. The world is watching and the opportunity is directly before the member associations to send a loud and clear message that FIFA ‘gets it’ and is truly changing”.

In addition to including disability as a protected characteristic, the reforms address issues of governance, accountability, transparency and wider diversity. The 24-member executive committee will be replaced by a council of 36 members, at least six of whom must be women.

After the reforms had been approved, Dodd tweeted, “Historic moment of #FIFA reform #genderequality #WomenInFIFA”.

Acting FIFA President Issa Hayatou said, “This will create a system of stronger governance and greater diversity that will give football a strong foundation on which to thrive. It will help to restore trust in our organisation. And it will deter future wrongdoing.”

Discrimination of any kind against a country, private person or group of people on account of race, skin colour, ethnic, national or social origin, gender, disability, language, religion, political opinion or any other opinion, wealth, birth or any other status, sexual orientation or any other reason is strictly prohibited and punishable by suspension or expulsion.

In November 2015, CAFE called for disability and inclusion to be at the heart of FIFA reforms. Speaking today, Level Playing Field Chair and CAFE Managing Director Joyce Cook said, “Disabled people are the largest minority in any population and it is just and right that Article 4 prohibits discrimination based on disability. We welcome these reforms. What is certain is that when disabled people are also at centre stage, diversity and inclusion naturally becomes central which in turn will strengthen the integrity of the whole game”.

To read more about the reforms, visit FIFA.com. 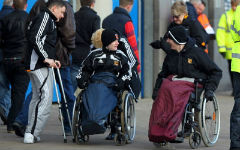