A Bristol City-obsessed eight-year-old – who led the team out onto the pitch after an operation to help him walk – has been named Football League supporter of the year.

Super-fan Oskar Pycroft, who has cerebral palsy, was handed the award at a star-studded ceremony on Sunday.

Oskar, who has never missed a home game, said winning was “just amazing”.

In January, Oskar, whose bedroom is adorned with City memorabilia, stepped out in front of the crowd at the Championship side’s Ashton Gate ground.

Speaking at the ceremony in Manchester on Sunday, Oskar said it had been “a hard tough time all through my life”.

His mother Lizzy Pycroft said her son was “a character” and he had “brought lots of people together – both City and Rovers”.

“To me, he’s always my little boy but to others he’s been an inspiration. I find it really strange because I see the ‘day in, day out’ but for him to be recognised is awesome.”

Article reproduced from the BBC 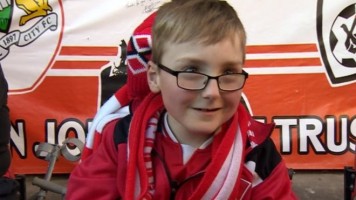