From the Football Supporters Federation (FSF)

Fans for Diversity writer Isra Gabal spoke to the parents of Nathan Shippey, a young Sunderland fan on the autistic spectrum who had a sensory facility named after him at the Stadium of Light, about why clubs need to think beyond the wheelchair on disability access…

Most of us have felt it, the match day buzz that the large crowds, bellowing noise created by thousands of fans and bright lights cause. But before his parents took a stand, the experience for eight-year-old Nathan Shippey didn’t leave him dizzy with excitement, but rather distressed and fearful.

Nathan, who is on the autistic spectrum, had been following Sunderland from a young age, but unfortunately due to his struggles with the loud atmosphere had to stop attending matches.

Thankfully, the love of his parents meant that they weren’t going to stand idly by while their son missed out on one of the simplest joys in life, the beautiful game. Peter Shippey, Nathan’s father and life-long Sunderland supporter, chose not to let things go so easily.

Through his and wife Kate’s sheer tenacity and dedication, they’ve ensured their son can enjoy football matches like any other supporter by getting a sensory room approved and created at the Stadium Of Light, with fans like him in mind.

And the cherry on top of that accomplishment? It’s named after their delightful son. Peter and Kate Shippey are undoubtedly pioneering the way for disabled fan inclusion, saying the room has changed their lives, and they hope it’ll change the lives of other families dealing with similar problems who would never have considered attending a match in the past. Parents to three boys with autism, Peter and Kate were suddenly facing issues they had never considered before. Peter said: “Before bringing Nathan to matches, to tell you the truth we weren’t aware of the problems a lot of autistic fans face, such as the noise levels and the atmosphere being too much for them to handle.

“These problems were things that were brought to us, not something we actively went looking for, and then we decided to do something about them instead of accepting things the way they were.” The Shippey’s tried many alternatives so that they could change their son’s experience, and even bought two season tickets to the Black Cats bar, but unfortunately it was obvious ten minutes into their first game there that the noise was still too much to handle for Nathan, so again, they had to leave. When that didn’t work, Peter started thinking there must be another way, so he contacted Chris Waters, the club’s Supporters Liaison Officer (SLO), and started “throwing ideas around.” “The club got onboard with our ideas straight away,” Peter said. “Helping us develop them so that the room worked in the best way it could after it was built.

“I’m extremely proud that Sunderland are the club that have brought the dream to reality, when it was something that seemed so out of reach in the past.

“We couldn’t thank Chris Waters and Margaret Byrne enough for how incredibly involved and accommodating they have been.” Chris Waters said: “The main objective of my job is to improve the match day experience for supporters at the Stadium of Light, so as soon as Peter got in contact to tell me of Nathan’s experience it was obvious that we needed to find a solution to help him enjoy the matches live, rather than on TV as he had been. “The fans we’ve had in the Nathan Shippey Sensory Room this season have all given us amazing feedback so far, which is key as its telling us how incredibly important it is to actually have facilities like this in the stadium and in turn it sets up for thinking about other similar projects for fans facing difficulties. “The reception of the room has been overwhelming and the demand has meant it’s full until March, which we’re very pleased about.

“The room has proven a valuable introduction to the stadium that will only add positive notes to the way fans with sensory issues, and hopefully fans with any type of disability, are treated.” The room, which has been full all season, has been a screaming success, with fans travelling from all over the country to enjoy matches in a safe and comfortable environment. Peter added; “It’s a shame Sunderland gets judged for their performance on the pitch when they’re doing much greater, groundbreaking, things off the pitch that just don’t get as much attention.” Peter and Kate are now pushing for an identical room built in mirror image across the other side of the stadium. Peter estimates this would cost £1m. “If you think about how much money is in football nowadays, you’re not really asking for a lot,” Peter said.  Seeing the room in action and how something as simple as a soundproof enclosed space, with various sensory calming tools and a pair of ear defenders works, you can’t help but wonder why this hasn’t been implemented by clubs before.

The concept behind the room isn’t revolutionary, and the objects inside aren’t technological advances (a lava lamp and a picture exchange communication system), so it’s a wonder why fans with disabilities haven’t had their needs met before now. The Accessible Stadia Guide, which The Premier League, the Football Association and Level Playing Field, all contributed to sets out minimum standards all new grounds have to meet in terms of the provision, location and quality of facilities for disabled fans. Speaking to Joyce Cook OBE, chair of Level Playing Field, she believes the main reason it’s taken this long for a sensory room to be created is down to lack of awareness, as is often the case, and rates the football industry’s treatment of disabled fans a five out of 10, stating all clubs must try harder. “It’s great to see Sunderland taking the lead in installing the first match day sensory room,” Joyce said. “It has made a massive difference to Nathan and his family and to other local disabled fans.

“Peter and Kate Shippey have been true champions in this respect. “Of course, there has been progress in the last 10 years and I wouldn’t want to detract from the clubs that have been working hard to improve the situation for their disabled fans, however, there is still a great deal to be done to ensure disabled fans are truly welcome at stadiums across the UK, as recent reports have shown. “On that basis, we welcomed the Premier League’s announcement last year. This pledge is a dramatic step forward, it’s certainly long overdue, and we do need to keep our eyes on the ball.

“As always, the proof will be in the pudding and we’ll all be watching closely. It will certainly be a great day for football fans and for their clubs when it finally happens, but we’ve got to get there first.” Last year the Premier League pledged that all Premier League clubs will meet minimum Accessible Stadia standards for disabled spectators by August 2017. Joyce also pointed out that other fans are always very supportive and sympathetic of the issues faced by many disabled fans, therefore now more than ever, they need to show their support.

Her message to those fans is: “Please keeping asking the difficult questions and please keep reminding your clubs how important your disabled fans are to your fan base.

“We need to keep this topic at the top of the agenda – it’s the only way we are finally going to get the job done.”

The Disability Discrimination Act 1995 & 2005, states that it is unlawful for a service provider (such as a football club) to discriminate against a disabled person by “Failing, without justification, to take reasonable steps to prevent it being impossible or unreasonably difficult for a disabled person to use the service (failing to make a reasonable adjustment).”

Therefore, it is reasonable to state that clubs who are failing to provide suitable areas for fans with any sort of disability to view games in are, in fact, acting unlawfully.

Having been recently made aware of some incidents where disabled supporters have been offered a seat at ground level, only for their view to be disturbed by television cameras and crews, we asked Joyce what provision, in her professional opinion, should be put in place for live games or stadiums in general. She said: “There may be other fans at a match with a partially obstructed view, especially at pitch side. But they usually have a choice and can stand, sit elsewhere if they wish or can move around within their seat. For many disabled fans, that’s just not possible and to make it worse, there is often absolutely no other choice. “We often get such complaints at Level Playing Field, as well as complaints from disabled fans who follow their team away, only to be placed with the home fans, which is, as any football fan can tell you, a truly miserable experience.

“Those disabled fans are often asked to hide their team colours and are even asked not to celebrate goals – an impossible request of any passionate and loyal fan. “There is no excuse, the standards are very clear. Disabled fans should be given a choice of locations around the ground and they must be able to sit with their own fans at football matches. There is nothing worse than staring at a camera crew or another fan’s back for 90 minutes and then rushing home to catch the highlights on TV or being told to stay quiet in an environment that thrives on a loud atmosphere.” Joyce wanted to add: “Many congratulations to the Shippey’s, Sunderland and all involved.

“You have paved the way for better things and I believe that other clubs are now looking to follow suit, which is great news.”  What’s next for the Shippeys? Well if creating history wasn’t enough, Peter and Kate have set up The Shippey Campaign to promote the concept throughout the Premier League and are in talks with football stadiums across the country, including Murrayfield and Wembley, and even attended the Stade De France in December to shed light on the issues facing disabled fans. With Manchester United potentially setting up a similar room for fans with sensory disabilities, it seems disabled fans can breathe a sigh of relief, for they’ve finally found their heroes. The Nathan Shippey Sensory room is located in the Black Cats Bar at the Stadium of Light and tickets are subject to availability. If you are interested in using this sensory room this season please contact Chris Waters, SLO, at chris.waters@safc.com, for further information.

Article reproduced from the FSF 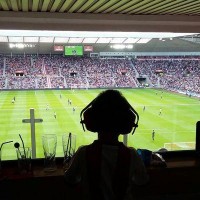