It seems evident football needs to make more space for those with disabilities. I remember the buzz of my first and only game at Highbury some 12 years ago. I was somewhat overwhelmed by the whole experience which went by in a blur. But there’s no doubt, sport excites all the senses, emotions run high, shouldn’t everyone who attends have to option to receive a full sensory experience?

It’s sad to see that even with the opportunity and monetary means to make experience-altering changes, many clubs appear to shun their responsibility to do so.

Can you imagine bagging a ticket to go and cheer on your team and being asked to sit in among those loyal to your rival?

That’s right, the report revealed that six of the 20 Premier League clubs and ten of the 72 Championship and League One and Two clubs still made all wheelchair users sit together, whether they are home or away supporters.

I believe that sport should always foster camaraderie and a general compassion for all involved. However one might argue you lose the magic when not among your mates, part of the team, or separated from your family because there is only room for your carer.

A lack of provisions for those with sensory impairments seems to pervade many sports. Those who do manage to make it to the match report extremely poor sight-lines for disabled spectators at 50% of Premier League clubs.

Many of the stadiums would understandably require adjustment of original architecture, with the layout of many of the hallowed grounds being less than agreeable. However, the report claims: “Despite years of campaigning, many sports fans with disabilities find facilities at sports stadia inadequate or inappropriate for them, even when the grounds have been modernised.”

Such statements cause one to question whether those responsible for delivering the drama and excitement of live sport are sleeping on the job? And yet they call it the beautiful game.

And so what happens now? Will those with the power and the pennies, go back to the dressing rooms and look at their formations and chose to become more forward thinking? I suppose that is yet to be seen. The report concluded with confirmation that eight Premier League clubs would not achieve the minimum standard for wheelchair provision by August 2017.

It seems the largest spectator sport in our great nation is yet to cough up the cash and commit to ensuring accessibility for all. 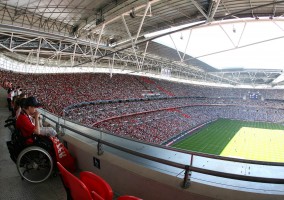