Disabled fans Jo and Jeff Newall have won the MK Dons Fans of the Year award for their contribution to improving the experience of disabled football supporters, as well as their commitment travelling to away matches with the Dons.

Jo, a wheelchair user, and Jeff who is partially sighted have been season ticket holders at Stadium MK since 2007 as well as attending a majority of away games using the club’s wheelchair accessible minibus.

On their travels they write about their experiences of access and inclusion at football stadia – whether good or bad – and feedback both to the club in question as well as MK Dons. They are also regular contributors to Level Playing Field’s Fans Comment section.

The feedback on the barriers Jo and Jeff face, as well as examples of good access have been an invaluable source of information for other disabled fans as well as helping clubs make improvements where necessary, and MK Dons recognised their efforts by awarding them both as the clubs Fans of the Year.

The pair were invited to the clubs prestigious Player of the Year Awards evening, and were surprised and delighted to be presented with the award, where they were pictured with Dons Manager Robbie Neilson accepting the accolade.

On winning the award, Jo said: “we just turn up and enjoy ourselves – whilst we might complain when we think things aren’t right, if we didn’t enjoy ourselves, we wouldn’t keep going to matches”.

As well as the award, the prize included a D, B & B at a Hilton Hotel of their choosing where they spent a weekend in London.

Congratulations Jo & Jeff, we hope you enjoyed your weekend away! 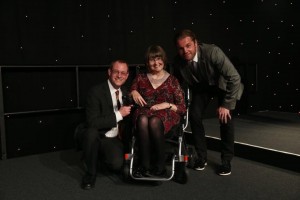