John Flanner has been an Aston Villa fan since 1956 and has been attending matches at Villa Park ever since. In 1967 at the age of 19 he was registered blind. He has corresponded with the club via letter and email regularly over the years with praise and, in his own words ‘constructive criticism’.

When his son Ian started attending Villa Park with him he provided his Dad with match commentaries for many years until John got an earpiece radio through which he can now listen to the in-house commentary.

John is now 70 and has been supporting the club for about 62 years. Amongst other things he was awarded an MBE in 2014 for his services to Diversity and Equality. You can see a photo of John and The Princess Royal at Buckingham Palace on his website here. He has three books under his belt, the latest of which, ‘Beautiful Game, Beautiful Memories’ was published last year and featured on Aston Villa’s website here.

When telling Level Playing Field about receiving the award he said:

“At the end of April I was totally surprised to receive the Pride of Aston Villa award at the end of season awards dinner, where I was a special guest of the Club, along with my son Ian, who accompanies me to games. The trophy was presented to me by Ian Taylor, a former player and Aston Villa legend.” 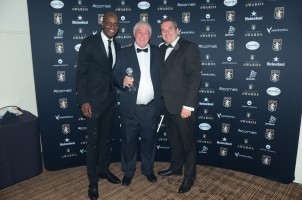