Seven Premier league clubs, including two of the richest teams in the world, will not have adequate facilities for disabled fans by August 2017. Chelsea, Liverpool, Crystal Palace and Bournemouth are all set to miss an agreed deadline to bring their stadiums up to the minimum standards for disabled access, according to the disabled fans organisation Level Playing Field (LPF).

Recently promoted Hull City, Burnley and Middlesbrough have an additional year to meet the requirements.

Last year, all Premier League clubs pledged to improve their stadium facilities for disabled supporters and increase the numbers of wheelchair user spaces by August 2017, as set out in the Accessible Stadia Guidance (ASG). However, in meetings with the Equality and Human Rights Commission, which took the league to task last year over inadequate accessibility provisions, the Premier League has now acknowledged that many will miss the deadline.

Commenting on the lack of progress, Chris Holmes, EHRC Disability Commissioner said, “All clubs agreed to make the minimum recommended improvements for disabled fans over 2 years. We are now at half-time, and for many teams, the performance is simply unacceptable.”

The Commission has warned that clubs could now face legal action. “Football teams are legally obliged under the Equality Act to ensure disabled fans are not disadvantaged. Where it is found that little or no progress has been made toward improving accessibility, we will consider using all our strong legal powers to ensure compliance; all options are on the table. We will be writing to each club to ensure they do not go back on their commitment given last year, and we will be receiving a report every six months from the Premier League on progress being made.”

Level Playing Field’s findings do point out some significant improvements. LPF Chair Joyce Cook said, “Just like last season on the pitch, champions Leicester City are leading the way, while many other teams such as Manchester United have shown clear commitment towards reaching the ASG standards of accessibility by next year.”

For other clubs, even newly built stadia are falling short of the minimum standards. One of the most shocking findings is that the Olympic Stadium, the new home of West Ham, will no longer have sufficient permanent seating provisions. In its current state, there will only be enough seats for disabled fans if places in the hospitality area are included on a flexible basis, which will never be part of the season ticket provision.

Joyce Cook remarked, “With the Paralympic Games taking place currently in Rio, how can we talk of the positive legacy of London 2012 for disabled people in the UK when even the Olympic Stadium will no longer be fully accessible? It truly beggars belief.”

In discussions with Level Playing Field, concerns have been raised by clubs regarding potential disruptions to season ticket holder seating, and the difficulty of obtaining planning permission for necessary changes to be made. Nevertheless, Lord Holmes believes such issues are symptomatic of a culture in which disabled fans are treated as a nuisance or afterthought. “Supporters are the lifeblood of any team, and we need to move beyond tired excuses that stadia cannot be made more accessible to disabled fans; no such issues arise when improvements and extensions to hospitality areas are needed.”

“The English Premier League is the richest league in the world; in a year when club signings are reaching stratospheric levels, Premiership clubs simply cannot continue to leave disabled fans by the sidelines.”

BBC: Premier League – Up to third of clubs to miss deadline for disability access 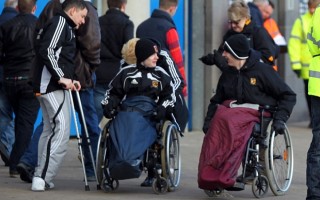