Kick It Out, football’s equality and inclusion organisation, has published new research to coincide with the launch of the organisation’s #KlickItOut campaign, to raise awareness around football-related discrimination on social media.

The study found that out of all the 134.2K discriminatory messages posted on social media during the 2015/16 football season, at least 12% of them made reference to disability.

Joyce Cook OBE, Chair of Level Playing Field said, ‘Kick it Out’s study shows a significant number of disability abuse and discriminatory messages posted on social media. All discriminatory abuse is totally unacceptable and disability abuse serves to reinforce negative and offensive stereotypes, to incite hatred towards and to demean disabled people who constitute the largest minority. Disability hatred and abuse is most often misunderstood or considered as banter. We should be very clear that it lies alongside all other forms of discrimination and hatred. Sadly, disability abuse and hate crime seems to be an increasing occurrence and we believe that these findings are just the tip of the iceberg.’

You can read the full findings from Kick it Out here

Kick it Out launch #KlickItOutCampaign 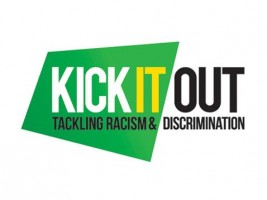