The All-Party Group supporting American Football was set up to grow the game in the Great Britain and to lend it’s support in potentially establishing an NFL team in the UK.

In the first meeting at Portcullis House chaired by Peter Bone MP (Wellingborough and Rushden). The group outlined its key purpose on how it can grow the game in the Great Britain and how it can build on the success of the recent sold out NFL games played at Wembley Stadium and Twickenham.

As a part of the meeting ‘British American Football Association’ (BAFA) Chairman – Marin Cockerill presented the 4-year strategic plan on how BAFA plan on growing the game.

LPF spokesman said “This is a very proactive step for LPF, as a charity we have seen a growth in other sports (Rugby, Cricket and Horse Racing) and we anticipate this to happen with American Football.” He went on to say “The NFL are about to complete their London games with Minnesota Vikings taking on the Cleveland Browns at Twickenham this weekend (29-10-17) and this successful series of games show how popular NFL is in the UK. Involvement by LPF in this group is fundamental to ensure disabled fans have a positive experience from the off when attending live NFL games in the UK”.

More information about the group can be found here.

You can also read the article ‘Secretary of State hails growth of American Football in the UK’ here. 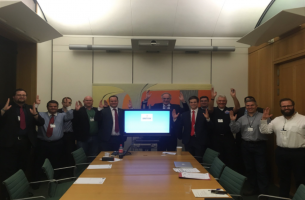