As part of their continuing commitment to improving the lives of local people living with dementia, Leyton Orient are holding their second match day (17th October) to raise awareness of dementia, as they work towards becoming one of London’s first dementia friendly football clubs.

The club has invited Alzheimer’s Society Waltham Forest to bring people living with dementia, and their carers to enjoy the match.

Their staff and volunteers will also be at the ground with leaflets and advice about memory loss and dementia. Posters will be displayed around the club, and information will be available in the match programme, club web and social media sites.

“Isolation, loneliness and inactivity can be major problems for people with dementia and those who care for and support them.

Sport plays a big part in many people’s lives and can help break this down. We want to encourage some of the 2,055 people living with dementia in Waltham Forest to continue to attend football matches and do the things they love. We are committed to working with Leyton Orient FC who are already a part of the Waltham Forest Dementia Action Alliance and are working towards becoming an even more dementia friendly football club.”

‘Football evokes such strong memories and emotions which can help people living with dementia. By making the Matchroom Stadium a dementia friendly place to visit, as well as raising awareness of the issue with our supporters, we hope we can help more people enjoy supporting their team and enjoying the beautiful game for as long as possible.’

The aim of the Dementia Action Alliance is to help create a community where people with dementia feel confident, understood and supported to live well.

Level Playing Field has recently teamed up with Dementia Action Alliance to become a ‘Dementia Friend’. The Dementia Friends programme is the biggest ever initiative to change people’s perceptions of dementia. It aims to transform the way the nation thinks, acts and talks about the dementia. 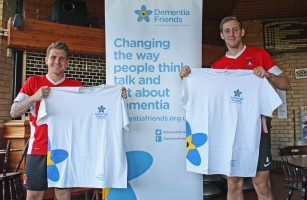