Members of the Liverpool Disabled Supporters Group (LDSA) made a special presentation to Brendan Rodgers and Daniel Sturridge at Melwood Training Ground this week to celebrate their support for the group.

Back in December Brendan attended a Christmas dinner with the LDSA, where he spent time meeting members, signing autographs and posing for photographs. His attendance helped make the night a special and memorable one for everyone involved.

Over the following weeks, the LDSA committee were inundated with messages from members wishing to thank Brendan for his time, his understanding of what LDSA was all about and his acknowledgement and appreciation of the support given by disabled supporters to LFC. To sum up this appreciation the membership decided to present Brendan with a permanent memento of his attendance at the dinner.

LDSA Committee Members Steve Evans and his wife Jeanette, presented a framed photograph of Brendan’s visit along with LDSA members Andrew Ward and Robert Lowe. After the presentation they stayed and watched a training session.

For many years the LDSA have recognised a player of the year, but two seasons ago the award was renamed in honour of Stuart Quinn, a founder member of the LDSA who passed away suddenly. The winner of the award is decided by a members’ ballot at the end of each season. The winner of the Stuart Quinn Award for the 2013/14 season was chosen as Daniel Sturridge, who was also presented with his award this week. 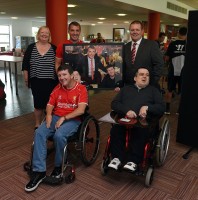