Wasps have just opened up their sensory room.

Wasps are the first top-tier rugby club to launch a pitch-facing sensory room for disabled people.

The club’s community team have converted two hospitality boxes at the Ricoh Arena into a quiet viewing room and a separate sensory space, where adults and children with autism and other disabilities can watch the action whilst being shielded from loud noise and bright lights.

The idea came about after Wasps fan Neil Boon was inspired by the efforts of the Shippey Campaign, which is a project encouraging the use of viewing sensory rooms within stadiums.

He approached the club after his seven-year-old twins Samuel and Thomas, who both have autism, couldn’t stay for a full rugby match inside the stadium due to the loud noise and lights.

Neil said: “Families that have children with autism often feel isolated because they feel like they can’t attend matches, but all of that can now change.

“One of the great features about this sensory room is that there are two rows of outdoor seating that allows children to begin transitioning from the room to sitting outside.

“My son Samuel really struggles with noise but even he has been able to come outside for a few minutes to sample the atmosphere before doing back into the sensory room.

“We tried the room out at the first game of the season and it was noticeable how much calmer the boys were and how much more they enjoyed and engaged with the experience of being at a rugby match – they were more concerned with what was happening on the pitch rather than everything else around them.”

“As parents it was also noticeable how much calmer we were – we weren’t constantly on tenterhooks wondering when the boys were going to start struggling – we could just sit back and enjoy the game ourselves.

“I’d urge any parent who has a child with autism or a similar disability to give the room a try because its an amazing environment and they’ll get a lot out of it.”

Up to four people and their parents or carers can now watch Wasps home matches for free during the 2018/19 season.

Jordan Young, community development officer at Wasps, has been overseeing the creation of the sensory room.

He said: “An inclusive approach is at the heart of all our community engagement in schools and local rugby clubs, and we’re thrilled to take this one step further on match days by opening up a dedicated space for people with disabilities to watch rugby.

“The sensory room is split into two areas. There is a viewing room where people can sit on bean bags, chairs or high stools to watch the action, and then if they feel overwhelmed, there is an adjacent space with sensory equipment such as bubble tubes and fibre optic lights to help calm them down.

“We have trialled the concept at both of our home games against Exeter Chiefs and Leicester Tigers which has worked well, and we look forward to making it available for the rest of the season and beyond.”

“It’s important to recognise the importance of providing such a provision for disabled fans. Recently we have seen a number of football clubs implement this provision off the back of the successful Shippey Campaign and their commitment to supporting their fans’.

To see one of England’s top rugby teams, start this provision in the sport is a big positive and will only draw more disabled fans to the stadium who had previously not had the option to do so.

Wasps are responding to their fans and their community by enhancing the matchday experience for their existing fans whilst providing a new opportunity for others. A great step forward in access and inclusion.”

Those looking to book a space in the sensory room for one of Wasps’ upcoming home matches should email Jordan.Young@wasps.co.uk 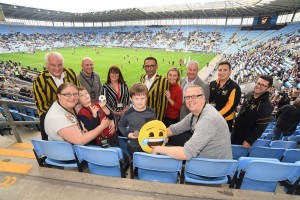