Level Playing Field were saddened to learn that former LPF Award winner Albert Bosely has passed away at the age of 96.

Albert, a lifelong Notts County fan, was a regular at Meadow Lane since the 1920’s and helped raise money for the club’s ‘Lifeline’ scheme, which was originaly set up in 1986 to save the club.

It was his fundraising work for the Lifeline scheme and the support for its events which led to Albert being awarded the LPF Sports Supporter Volunteer Award in 2011. Albert was presented with the award pitchside at Meadow Lane and was just reward for his dedication and service to the Magpies as a volunteer.

Lynn Lawson from the Club said, “Albert was a wonderful man who did so much for us. Everybody loved seeing him and his enthusiasm was inspiring. We would like to pay tribute to him for everything he has done”.

Level Playing Field would like to wish our condolences to Albert’s friends, family and everyone at Notts County at this time. 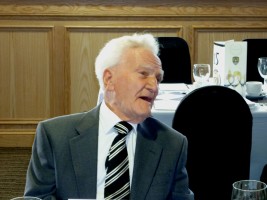