February is the Football v Homophobia month of action, celebrating diversity in football and uniting supporters, players, clubs and others across the game to take a stand against discrimination.

The campaign began in 2010 with an international day of action against homophobia and transphobia in football and grew to occupy an entire month of campaigning in February in 2013.

Throughout February, the campaign will be supporting those taking action to make an impact by delivering education packages, sharing stories across the campaign’s digital platforms and providing resources such as wristbands, pin badges and t-shirts.

Campaign Director Lou Englefield said, “This year the launch of the Campaign Month of Action is being hosted by Manchester City Football Club, one of the largest and most successful clubs in the world. We have some fantastic support from so many clubs, but there is still work to do”.

The campaign awarded 20 small grants for activity during February amongst grassroots clubs and campaign groups throughout Europe. Many of these grants, funded by the Fare Network were awarded in Central and Eastern European countries where LGBT communities can face increased hostility.

Level Playing Field Chair Joyce Cook OBE, added, “LPF is proud to support the Football v Homophobia month of action, and we wish them the very best for a successful campaign. LPF stands shoulder to shoulder with our partners to combat all forms of discrimination and exclusion”.

The Anti-Bullying Alliance recently reported that disabled people who are gay are likely to suffer from shocking levels of homophobic bullying.

For more information about the Football v Homophobia month of action, please visit http://www.footballvhomophobia.com/football-v-homophobia-launches-annual-campaigning-month-of-action/. You can also offer your support using the hashtag #FvH2016. 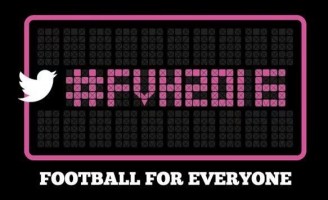