Level Playing Field Projects Coordinator, Kieran Reynolds was presented with the Crystal Palace Equality Award ahead of their home match against Liverpool at Selhurst Park on 31st March.

The award was in recognition of Kieran’s role helping establish the Crystal Palace Disabled Supporters Association (DSA) in 2015 and helping improve relationships between the club and disabled fans. This has helped the club make several improvements to accessible and inclusive facilities and services at Selhurst Park. The presentation was part of Crystal Palace’s Weeks of Action 2018 celebrations. Kieran was one of two Equality Award winners and his award was presented by Crystal Palace Chief Executive Phil Alexander and DSA committee member Caroline Bland.

The second award went to Crystal Palace Supporter John Williams who has supported a group of disabled fans to purchase their tickets. He also helps arrange transport to the ground for every match.

Owain Davies, Chief Executive of Level Playing Field said, “Since our Working Together programme launched in 2012, LPF and Kieran have supported the establishment of 19 DSAs across the Premier League, EFL and non-league. This award is a great accolade for Kieran, highlighting his passion and expertise in both setting up new DSAs and supporting existing ones.  His enthusiasm and commitment is clear to see and is a key contributor to the positive work carried out by Level Playing Field”.

Kieran Reynolds said, “It was a lovely surprise and honour to receive the Crystal Palace Equality Award and I would like to take the opportunity to thank both the club and Disabled Supporters Association (DSA). I am lucky to be part of a great team at Level Playing Field. It is great to see Crystal Palace DSA continue to grow and the club improve facilities and services for disabled fans. We would like to thank the club and DSA for supporting Weeks of Action 2018 and we look forward to continuing our positive relationship.”

Sharon Lacey, Head of Customer Service at Crystal Palace said “We are delighted to take part in the Weeks of Action campaign, we use it as a great way to reward staff, supporters and members of the local community for their part in improving the matchday experience for all which is why we launched our Equality awards on 2017. This season the theme was #ourmatchday and our interpretation of this was recognising people who have pushed for a better matchday and inspired more people to get involved and come along to watch a match. We easily found the first winner in a supporter named John Williams who assists a group of adult supporters with learning difficulties in purchasing their tickets and arranging transport to the ground for every match. The second award went to Kieran Reynolds from LPF, Kieran assisted the start-up of the CPFC DSA which took some time however once set up he did not stop there, Kieran has always been on hand to support and answer any queries both the Club and the DSA might have, he is fully committed to improving the experience at all Clubs and therefore a worthy winner for such an award”.

Kieran was interviewed ahead of the match and you can watch the video below. 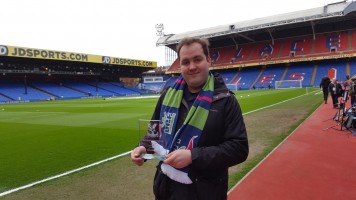