Manchester City FC pulled out all the stops to mark this years successful Weeks of Action campaign with a series of activities and promotions celebrating the theme of access and inclusion.

City used home games against Aston Villa and West Ham to promote Weeks of Action 2015 with the theme of access and inclusion being promoted in ‘City Square’ prior to kick off of both games via the public address system. This was also a chance to showcase a range of City in the Community (CITC) initiatives for disabled people in the local community including the ‘One City’ disability programme. Supporters who bought a matchday programme also got to read about LPF and this years Weeks of Action campaign.

There was even time for star player and Argentina international Pablo Zabaleta to pull on an LPF t-shirt to show his support for this years campaign. (Pictured below)

The club also hosted an amputee football camp on the 19th April in partnership with the England Amputee FA. The tournament, consisting of 3 teams from Oxford, Lancashire and Merseyside was held at the City Football Academy, part of the club’s state of the art Etihad Campus.

Thomas Lawson, CITC Disability Apprentice on Amputee Football stated: “It’s amazing to actually see. I bet most wouldn’t believe the pace of the game. It’s really something else: the strength – both mental and physical is on another level.” 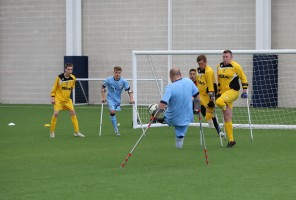