Manchester City FC have celebrated Weeks of Action in style by hosting a series of events and activities at the club to mark this year’s campaign.

Mark Barber, secretary of the Manchester City Disabled Supporters Association (DSA) also explained the role of the DSA and what they do which featured in the matchday programme as well on the club website.

Alongside their matchday activities, City used the Weeks of Action fortnight to promote their City in the Community disability football teams, including Mental Health & Powerchair football sessions and a Downs Syndrome Football Festival.

Level Playing Field wish to thank Manchester City for their brilliant support of the LPF Weeks of Action. 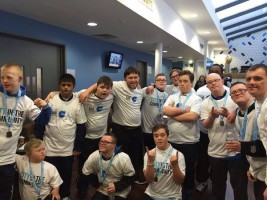